Cycling Lane in Thane :)..Congrats everybody

Thanks to the efforts of all Cyclists & Critical Mass... We have our stepping stone for success. Below is the extract from today's TOI Mumbai.

MUMBAI: Rashmi Kotian's mountain terrain bicycle is by now accustomed to potholes, drunk drivers and other works in progress. Every morning, she
rides her eco-friendly two-wheeler on the not-so-friendly roads in Thane for an hour as part of her compulsive fitness regime. She would love to use the vehicle for higher purposes like commuting to work, but as a submissive biker who has often given way to speeding cars that wish to overtake, Kotian fears for her safety. Last week, when this Thane resident took part in a cycling rally to emphasise the need to recognise a cyclist's right to the road, the Saturday evening traffic ensured many unwanted breaks.

So, the recent proposal submitted by the Thane Municipal Corporation to the state government to make 100 km of dedicated cycling tracks comes literally as a breath of fresh air for space-starved cycle enthusiasts like Kotian. These cyclists, who otherwise have to deal with the onslaught of aggressive car drivers and the wrath of pedestrians who curse them while crossing the road, have for long been waiting for ways to befriend the city roads.

This proposal developed under the integrated mobility plan of Thane, has already been sanctioned by the state and is currently awaiting approval from the Jawaharlal Nehru National Urban Renewal Mission. The plans is to reserve a corner of 2 metres on the surfaced roads for a cycle track which will start from Thane station-Creek Road-Saket, Saket to Balkum, Anandnagar to Ovla and Atmaram Chowk at Mumbra Reti Bunder up to Kalwa among others. Work will soon commence on this Rs 275-crore project for road concretisation on 36 km of road network in the city.

The project aims at encouraging cycling as an alternative mode of transport. "While we have seen that people prefer to either walk or take a rickshaw for short distances, we wanted to promote cycling as a means of non-motorised transport. This will also help in reducing vehicular noise pollution that currently stands above 70 decibels in Thane. In order to develop corridors for cyclists on every road, we want to reserve at least two metres on most of the roads in the city for cyclists,'' says K D Lala, city engineer, TMC. These corridors will be separated from the main roads with the help of barricades and signage.

On his trips abroad, though, Lala noticed that cyclists did not need physical barriers or yellow lines to demarcate their portion of the road and could move freely without fear of vehicular encroachment. But Indian experiments insist that this is a far-fetched situation. Take the two-km cycling lane that already exists in Wagle Industrial Estate in Thane, for instance. It was inaugurated in 2005 on World Environment Day and soon enough, lost itself to the collective cacophony of hawkers, car showrooms and autorickshaws. "Even the sign that says `Cycling Lane' has been hidden by the grinning face of a politician,'' says Renny Varghese, a Thane resident who commutes to work on his cycle.

While Mumbai's adamant traffic gives its cyclists faint hope of survival, Pune, which was once known as the City of Cycles, is also fast losing that title, thanks to two-wheelers. To promote the use of cycles, the Non-Motorised Transport (NMT) cell started by the civic body has begun integrated planning for setting up cycle infrastructure and aims at developing at least 300 km of cycle tracks. Out of the 93 km of Jawaharlal Nehru National Urban Renewal Mission road network in the city, cycle tracks have been laid on nearly 65 km of the total length. According to PMC road department head Vivek Kharwadkar, 50 km of cycle tracks are ready or nearing completion on the road network other than the JNNURM roads.

The PMC also aims at having end-to-end development of Bus Rapid Transit (BRT) routes, which includes footpaths and cycle tracks. Currently, the PMC is developing cycle tracks on the pilot BRT route of 17 km and has sought World Bank support for its NMT feeder service to BRT pilot route project. "The WB has approved our project, which consists of developing cycle tracks in roads connecting to the BRT route, in principle. It is a way to encourage citizens to use NMT up to the BRT stop which is going to be a 60-km network. We have completed the Detailed Project Report and will soon submit it,'' Kharwadkar says. Despite this however, encroachment by motorised vehicles has been inevitable. In the future, PMC aims to imitate the `hire and ride' bicycle programme, which is seen in countries like Paris.

TMC city engineer Lala says there are similar dreams for Thane's future too. "This service will involve the setting up of hiring terminals at different points in the city in the future. It could function on a smart card basis where people hire cycles with a monthly pass,'' he says, but quickly adds as an afterthought, "Let's see how the track goes first.''

Also we need to give a special thanks to Sharmila Ganeshan(reporter of TOI) for giving cycling the much needed media attention for promoting Cycling within Mumbai.

Three Cheers to all of us. We need to ensure that more of us make use of these lanes so that they are not overtaken by Hawkers/ Rickshaws & Motorcycles. we need a lot more of active cycling.

Replies to This Discussion

Permalink Reply by Anoop Rajan on February 3, 2009 at 5:34pm
Thane folks any update on this?

Permalink Reply by MumBiker on April 26, 2009 at 2:28am
Well this shows what good concentrated efforts can lead to ... did somebody say .. theres no hope :P

I feel if we go down without a fight ... by relenquishing our space to notorious characters ... it will surely be nothing but cowardice.

Permalink Reply by Renny Varghese on April 26, 2009 at 6:46am
Yes the efforts of the people involved is commendable. But like any govt. initiative this one will also be stuck under yrs of red tape. Thats what dwindles the spirit. The sea-link is a live case.

Chandrashekar(TMC chief long time back) came and did a wonderful job... But the rest after him were the same ol ones... Thanks to him atleast some parts of thane are still very good... Imagine the roads he made are STILL in excellent condition. While the ones made the the next bloke have been potholed and repotholed over the years..even the paver blocked ones which are the worst things to be used on roads(these are supposed to be used for areas which have minimal loading or walking people) even if they are used in heavy loading areas if they are fit in properly they will work well.. but you know how our contractors are...

I had told this to a lot of people and even last time at that citizen meeting at Bandra(CM)... while the efforts are good... it is important for such things to be sustained... They made a cycling lane in thane near the passport office. I am guessing it was a pilot project but anyway that lane is gone to the dogs now( will tell that story later) So important thing is sustained usage or yes any path will be taken over by the likes of bhaaji wallahs et al.

Here is the full story: from todays Times of india - Pg 11
http://timesofindia.indiatimes.com/news/city/mumbai/BMC-pedals-for-...

Mumbai: The long walk from CST to Churchgate may soon become an experience that pedestrians will look forward to. “The entire walkway, including crossings for pedestrians, will be built at one level. This will be especially useful for the elderly and the handicapped as they would no longer need to navigate subways or FOBs. Instead, cars will be routed over small humps, built over these walkways,’’ said additional municipal commissioner R A Rajeev while speaking at a panel discussion on ‘Building Livable Cities’.
Organised by Urban Vision (a forum highlighting good urban design practices) and the British Council, the meet threw up many interesting proposals. Rajiv also informed the panellists that the municipal corporation was also looking into proposals that will make the city friendlier for cyclists. “The BMC has consulted firms to create dedicated cycling tracks. We’re also putting into place local area traffic management plans to tackle congestion in particular areas,’’ said Rajiv.
The panellists included Rajeev, builder Surendra Hiranandani, NGO Citispace convenor Neera Punj and Washington-based architect and urban designer Dhiru Thadani.
Other suggestions involved increasing the waterfront area along Nariman Point to Cuffe Parade, more affordable housing, provision of security and upkeep of the city’s open spaces. But the idea that received unanimous support was making the city more ‘walkable’. “Counter-intuitively, wider roads mean more accidents and on-street parking actually helps protect pedestrians. Building better sidewalks and increasing interconnectivity are all solutions that need to be looked at,’’ said Thadani.
“We have the maximum number of people using the public transport system and we have more people walking to work. Now, we need to focus on strengthening the systems we already have to make it a truly world class city. China is a good model to study in this regard,’’ said Hiranandani.

I was invited for this Seminar and I was there. What Rajeev responded was to my question with regard to the BMC's attitude towards supporting a bike-sharing initiative. I personally felt that he was not really to the point in his reply and it was a "bird's-eye-view" response. The words highlighted above was not heard by me for one. Though, he said there are various proposals that we are evaluating. There was no mention (to my memory) about consulting firms on building cycle tracks. I read this report with interest since they did not seem entirely correct. Though, I would love to see the BMC taking initiative for this. All my tries with various letters to those guys has not evinced any response. It is one thing talking in a Seminar and another to implement. All the best for all of us who are enthusiastic about this.

Permalink Reply by Renny Varghese on August 23, 2009 at 10:40am
As expected from our so called "sensitive to public needs" BMC officials. All in the air statements. I unfortunately couldnt attend this seminar. But I do recollect a design proposal put up by the firm SE-ARCH on green-walks " pedestrian walkways" in mumbai. i have an image of the same:
Maybe if these officials could take interest in such proposals from actual experts it would save them a lot of time and money ( imagine they spend so many crores on the SATIS project in Thane and didnt do the calculations right about the lane width. Apparently two buses cannot fit in alongside on the bridge due to mis-calculation by the engineers. ) Welcome to the land of Aryabhatta and Ramanujan! 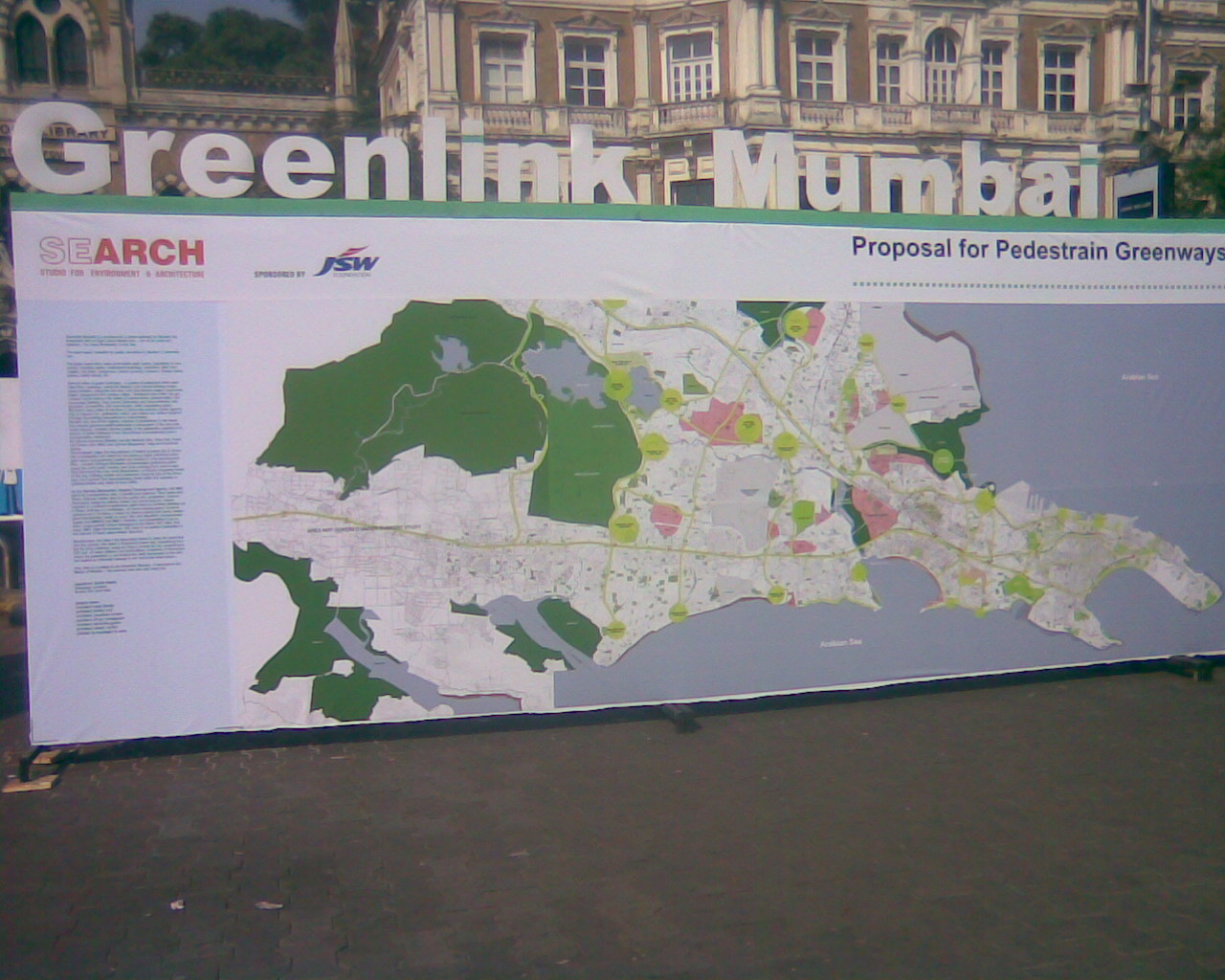