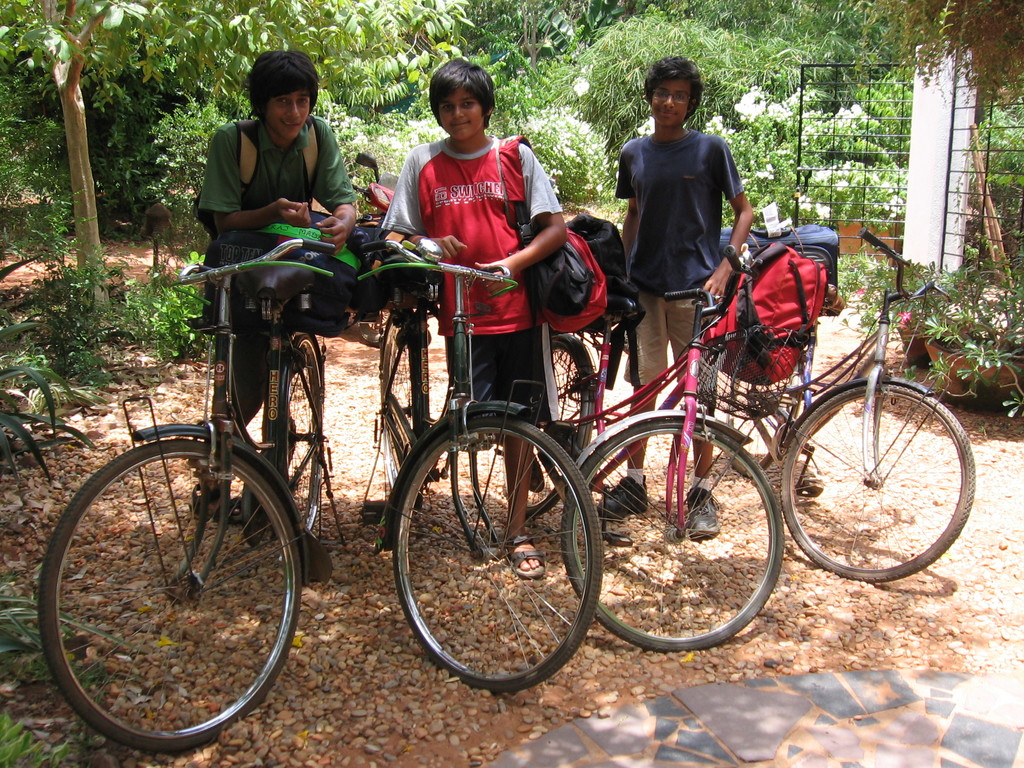 "Liberte, Egalite, Fraternite"--Liberty, Equality, Fraternity
the slogan of the french revolution took on new meaning for rohit and pankaj and our friend mihir ( all between 11 and 14) in auroville!! significantly, also having french connection, as it was founded by a french woman!!

we biked everywhere that we had to go, riding 30-40kms daily on some really khatara rented bikes. after being together for the first 3 days, until we got our bearings and they got familiar… Continue

the road above my street pt 13

In the morning mist (there is none, one has to force the hallucination
upon the brain), and a sky neither white or blue, the green DTCs blind
the sleepy eye and shake the limbs to move, and there.

My last attempt at Khirki Masjid had turned out to be a faux pas, but
these time falter we did not, and circling across the steel net
boundary which presumably is the beginning and the end of ASI's
maintenance plan (apart from the very pinkly restored… Continue

Thanx in Advance;
Please help in zeroing on a cycle for me.

Requires a real lightweight cycle but no racers as it kills back; Sleek tyres; Till now only found BSA Ladybird [I dont mind riding ladies cycles / Actually i prefer them… Continue

I KNOW ONLY THE DATE OF PUNE BARAMATI RACE THAT IS 22 JULY, ANBODY CAN TELL ME WHOM TO CONTACT.

Ever since I have joined Cyclist.in, there have been some strange experiences.
On one of my trips back from bandra on a sunday morning, a bunch of youngsters in a car rolled down the glass and called out from the car" hey, r u on cyclists?"..there was an exchange of thumbs at high speed and it gave me a feeling of belonging, a belonging to our community , our group" CYCLISTS.in

Cyclists.in now brings to you the entire range of Pro-Cycling Team Jerseys and shorts at super-low prices!

Cyclists.in now brings to you the entire range of Pro-Cycling Team Jerseys and shorts at super-low prices!
Get a complete fully-branded Jersey/Short kit of any pro-team for Rs.6,500! This is 30%-40% cheaper than most intl. websites selling full jersey/short kits. Plus, you don't wait or pay for international shipping and customs. All pro-kits are now readily available with us in…
Continue

you know it's monsoon when you leave for a century ride at 12 noon! and if you didn't know it yet you can be sure of it when you get caught in a torrential downpour!!
pankaj (my 12 yr old son) and i spent the better part of the morning fixing our new mud guards to the bikes and were ready to leave only at 12pm. until last week it would have been impossible to even conceive of such a late departure but with a wonderful cloud cover and grey skies to protect us from the sun we ventured out at…
Continue

the road above my street pt 12

Me had been acting real lazy this past week (for a semi quantitative
scale, I let my alarm snooze from 6 - 7:30 am, where every two snoozes
are separated by an interval of two hundred and forty seconds), so
Saturday had to be the day for a fresh, really really fresh beginning
(parentheses candidness 1: I had an early morning transfer).

Mehrauli we'll cover in detail some other day, so for now, we rolled in
towards Malviya Nagar, in search of Khirki Mosque,… Continue

anybody want to ride from bandra to town tonight 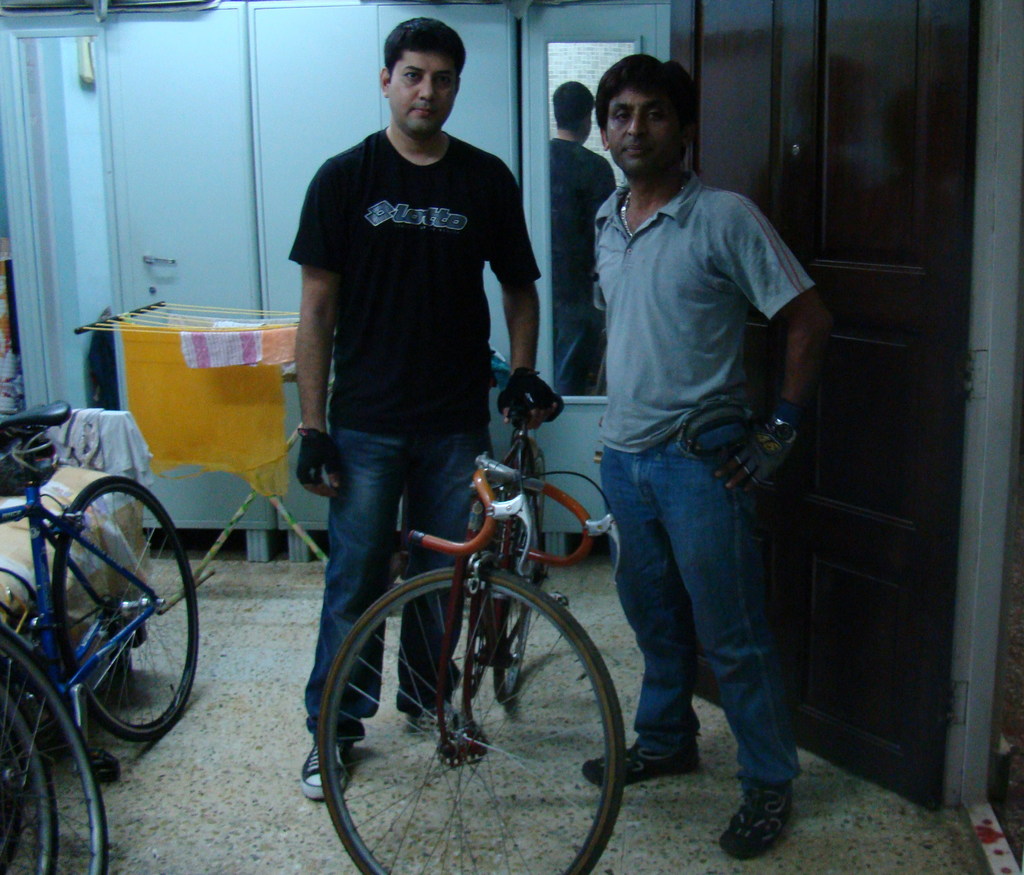 Lake and a purple flower

Such are the things you notice when riding on a bike and not zipping past India Gate in your air-conditioned car. So, while the 6.30 a.m. motorists rushed for an early day at work, I pedalled along the lake on the dust-laden stretch you cannot call a track, near Rajpath, India Gate. It is the popular boating lake, filled with tourists on weekends, and indifferently brushed aside by urban population as another eye sore with its dirty, marshy water. But that is exactly what is so lovely about…

Hello Everybody,Today all you bikers can cycle to work. You will find the roads not congested as the normal days asthe… Continue

I had 2 1/2 half days to myself as my wife Hetal was busy working :-) . After reading Vinoo's blog and surfing the net for different cycling options , I decided to take a full day tour of Shanghai by cycle with China Outside [ www.china-outside.com ] - managed in Shanghai by Fiona Lee…

Cyclists strip in protest against traffic

Cycling in the rain

Lets talk about 'how to take precautionary measures in the rain'.
Wet weather makes roads slippery, so you must ride your bike differently: A fall from the bike can leave a few bruises or even a fracture and put you off your bike from a day to a week or two.
So we will talk on four sub topics relating to cycling in the rains.
1) Braking.
2) Cornering.
3) Puddles.
4) Visibility.

keep the pollution away with RESPRO MASKS

hey
we've been keeping the pollution away with good quality [the best actually] pollution masks from respro.com ----now in stock at gear the bike shop 9987 05 9696
also available is a lighter on the pocket option, the bandit scarf. in 5 colours, including one with a skull print.
and reflective stickers for your bike, helmet, clothing [yes], available in designs that you cannot believe

Dear Customer,
The entire range of "Raleigh" cycles will be on display at my cycle store from Friday 18 June 2010 from 11am onwards.
Do drop in and take a look.
With Regards,
Pushkar.M.Vora.

My friend Sails & me took random Bike tours within Pune city. And the outcome is
a Photo Album. We named it "Cycle & the City, Pune edit" We know lots
of things are missing about Pune in this album. We will keep updating
this album

This is a gift for awesome Cycling Community of Pune. No matter
what it is named "Pune Cycle Prathisthan", "Zen of Cycling" or "Pune
Cycling Enthusiasts". This album is dedicated to all Cyclists of… Continue

Shammi, kudos to you for holding thirty consecutive rides in Bandra from 9:30 to 10:30 PM--Carter Road to Bandstand back to Carter Road two laps each and occasionally up 'Kane Road' a steep climb from Bandstand.
Recently he has organized some big rides too, which has received some good newspaper coverage and has surely created a big impact on the general public.
I have been riding most days too with this group and have thoroughly enjoyed… Continue