Well thought of keeping this in memory store but then, as it’s said a 2 inch pencil is more dependable than a long memory.

It all started with a small discussion with David about cycling, first thing that came to his mind was 27th July 2006 and he said KD “memories of two wheeler ride are worse than a nightmare”. I thought it’s the end of road, but a ray of hope was still there when he said let me try your bike once and then c.. We tried to sync up on a date when he would take a short ride on my bike, at last after 2 weeks he did it & I won’t forget the first puncture on my bike (Thanks DJ), I again thought if the maiden ride was on a flat tyre what next.  To my utter surprise the next day while we were travelling to office,  DJ mentioned that now a days he thinks of only 2 things …. #1: Commit for the month #2 Cycling… J I was zapped & happy. The very next holiday that was 2nd October we went to Firefox outlet in thane. The owner turned out to be DJ’s school type buddy Jose George and then…. Rest is history….

The alibaug ride was conceived for a long time & we actually were going to do Gateway to mandwa by ferry and then ride 23 + 23 kms to and fro from alibaug. We thought let’s try our limits and do it the other way round.

The journey was planned 1 day in advance and work load distributed, medicines & food packets, reflective wear, extra tube swiss knife & water filled in hydropack. We were all set for our D-Day.  0430 Hrs was the meeting point at Kotak bank sonapur signal and we were trailing by 17 minutes at the starting point itself. The weather was pleasant and the roads were encouraging to ride. Mumbai looks beautiful in early mornings. By the time we reached belapur we figured out a Pilot car and a couple of riders ahead of us by 500 Meters, we met them just before McDonalds they were 7 of them off to Lonavala & we thought we were the only crazy guys on the highway.  We took our first Pit stop at McDonald and we realized that we did it non-stop. 34 KMS …

It was great going…

34 Kms done and 70 More to go, it was 630 in the morning and both of us just looked at McD… it said opens at 6AM. … Guys beat this…..we gave the Hash Brown a slip… saddled up and we were on to Panvel. This city has changed and may be it was one of the longest flyovers I have ever ridden upon.  (Hope BMC is listening) crossed the city of panvel and just then met our office colleague Anil, he was off to Devgad in his Honda, clicked a snap with and back to the ride. The speed had reduced due to heavy truck traffic on the Bombay goa highway and distance between DJ and me was nearly 100Mts plus. I suggested him to keep his front light in a flash mode and whenever I had to look back for DJ I used to just look for the flash and start riding ahead.

We reached the 50Kms mark at 0800 hrs and halted for the breakfast at Xshan Bhar vishranti had a good missal pav/ omlet pav and anda burji. Refilled our hydration packs and were all set to go. Just then a family sitting on the table next to us walked across and said we want to click pictures with you. WOW DJ and I we were a celebrity (indeed). What I remember of that short encounter was, the old lady in the family must be around 70 + came to us and said I remember my son (pointing to the guy who must be around 40yrs old & clicked a snap with us) went from Vile Parle to Chembur when he was in 10th Standard on his cycle way back in 1980 (B&W Movie) but the beauty was she still remembered his long cycle ride. We smiled exchanged pleasantries and put our BUTS on the bike again. Next stop was predetermined at Wadkhal naka.

The road from Karnala to wadkhal was full of traffic and lots of small & large gradients; we wanted to take a halt on the Vikram Ispat bridge but could not as there was not footpath or a walkway on the bridge. We continued till wadkhal and there we saw the board TO GOA & TO ALIBAUG. Heart to heart we both wanted to turn left towards GOA. But then said let’s do GO-Alibaug.

We had almost done 70 Kms and the heat was burning all possible calories we had. So the best option to re build was to drink lots of Electral. We gulped down a couple of packs and set the sail for Poinad. It was a short distance but gradients were high and we got exhausted. Took a pit stop to get the hydra packs refilled and ate 2 bananas. All this while we had a lot of vehicles passing by and cheering us… many waiving their hands, many with a thumbs up and some with a sheer admiration.  Saying (EK Number/Sahi etc) guys great going.

The most interesting journey began post Poinad, I asked a lady standing by the road side (Maushi Mandwa kasa jayche) how do we go to mandwa? She pointed out a board just 100 feet away from us, said take that ride it’s a shortcut, you might get confused by ask people there and they will guide you thru. The pictures below are thru those small hamlets.

We took the right turn and believe me it turned out to be the most beautiful road I have ever been on before, it was a very small road thru the villages rather hamlets of interior alibaug, where the houses had the flooring done with cowdung. A well (KUVA) outside the house and lush green trees around. The freshness in the air was unbelievable, many a places only 2 bikes could have gone at a time, car was out of question. Small Schools and village panchayat office.  Once in the interiors the surprising part was I could not see a single poster of any politician wishing him for his birthday or Happy Diwali DADA… all this shit you can find it in our own cities.

We reached Rewas at around 1300hrs and took a pit stop again, DJ by this time was exhausted and his face said it all… but knowing him he is one guy with full of determination. Out of the blue there came three guys on an active and wanted to know more about us. They were in there twenties and were amazed to know that we came all the way from Mumbai… we spoke to them for a few miutes and pushed ahead… I also heard comments while passing thru these small villages ( A bagh ENGLISH BABU) from small kids of the age of 5 to 7.  For a flash of a second it was like pre-independence days were back…. We both were fully exhausted by this time and gulped down the electoral and last 100 ml of water in the sack. The road sign said 6 KMS to Mandwa jetty. Started peddling, first time I went on 2X2 shift else entire journey I was on 2 X 6….

Reached the jetty and decided to click a few snaps around the jetty. Booked our tickets on APOLLO catamaran, Our actual plan was to click at gateway but the catamaran was taken to Bhaucha Dhakka. We paddled out of the jetty dismantled the bikes put it in the taxi and straight headed home. Reached Mulund right at 1630 Hrs . 12 hrs from the time we left in morning. The next long ride is not known but for sure I will be penning it down. Thanks for being there with me thru the journey on paper…. 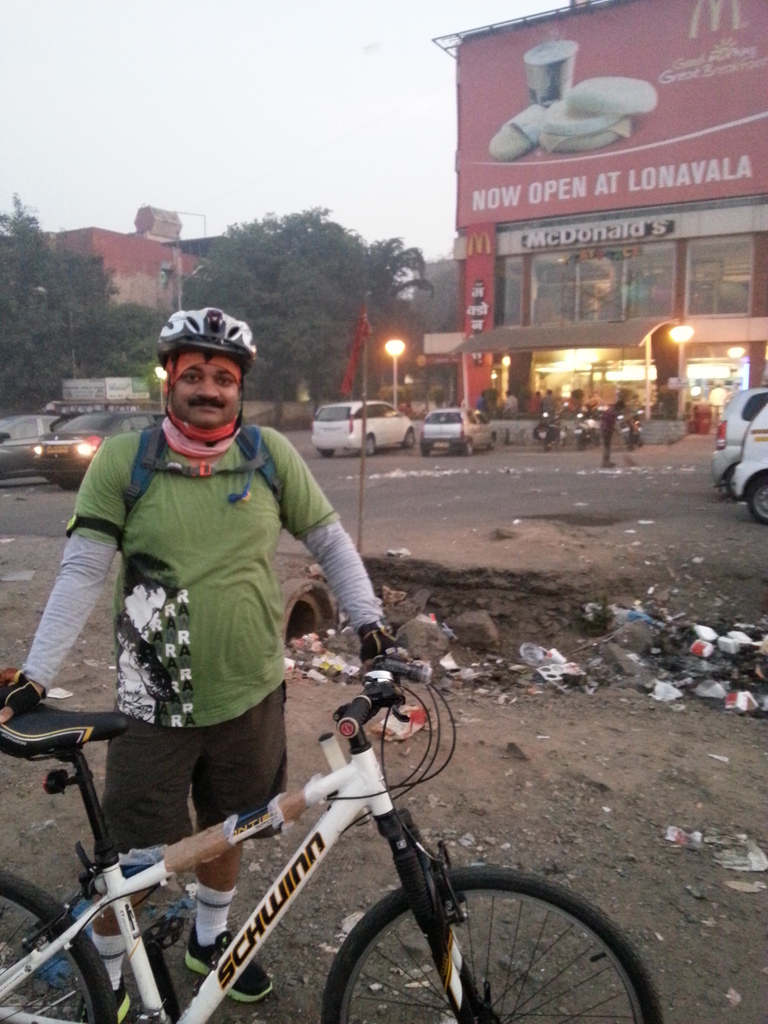 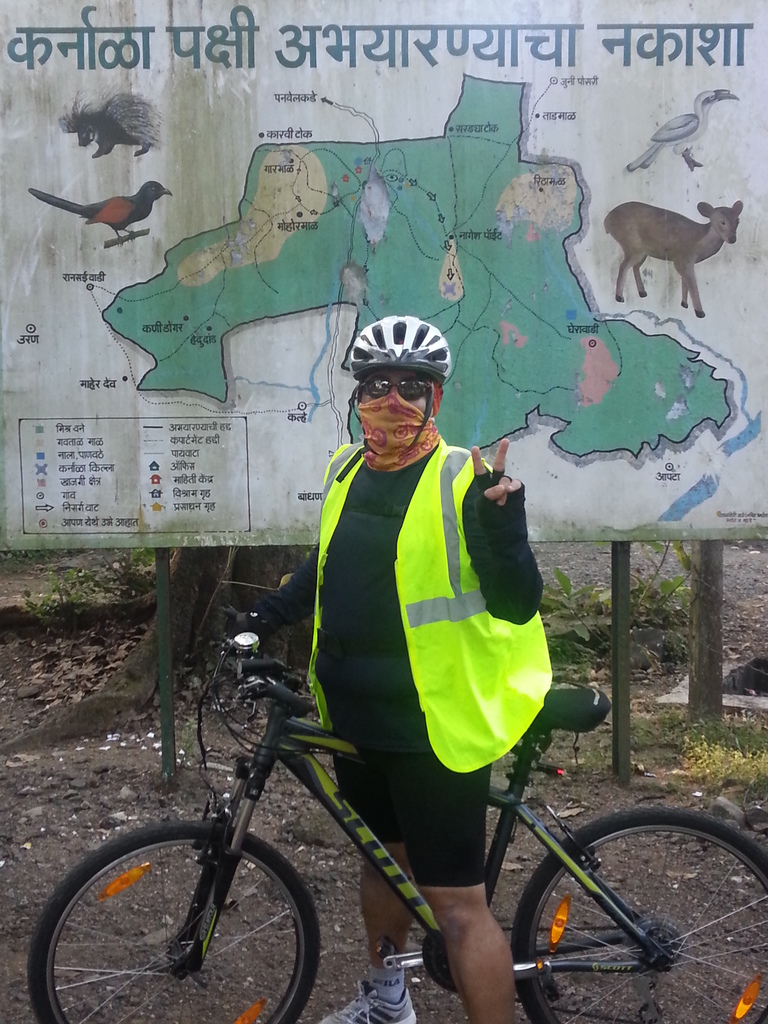 that was gr8 keep riding, Regads